Home > Traditions and History > The Twelve Days of Christmas

The Twelve Days of Christmas 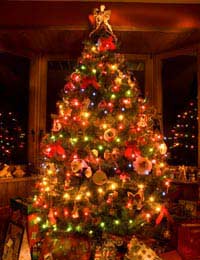 Back in the middle ages, Christmas celebrations used to go on for twelve days. You would have Christmas Eve, and then counting from the end of Christmas Day (Christmas day was considered a holy, not a merry-making day) onwards to the 6th of January, people would just make merry, be jolly and celebrate the birth of Christ. It was said to have taken the three kings, twelve days to find the baby Jesus.

There were still quite a few pagan traditions lingering in those days, so it was a pretty wild party: people were allowed to be a whole different person for twelve days. Men could dress up as women, women felt free to glue on a moustache and go on the prowl, servants could boss their - hum - bosses around… It was a non stop fun-athon. Now who would say 'no' to twelve days of straight partying?

Things all quietened down a bit when religion became serious business again (the Reformation and Counter-Reformation probably had something to do with that). Christmas celebrations were brought back to two days (Christmas Eve and Christmas day); though in later times many countries chose to add the day after Christmas day, frequently referred to as Boxing Day or Saint Stephen's day as an extra public holiday.

The reason why the Twelve Days of Christmas were celebrated in the first place is actually quite intriguing: there seems to be a difference of opinion between Eastern and Western "branches" of the Catholic Church as to when Jesus was born exactly. According to the Western division it was on Christmas Day, but their Eastern counterparts still firmly adhere to the belief that it was actually on the 6th of January. It remains unclear who is actually right, but it was good enough reason for the people in the middle ages to celebrate both - and every day in between.

How the Song Came About

The most popular theory about the origins of the song - The Twelve Days of Christmas - stems from the times of the reign of Henry VIII to the 17th century when Catholics were not allowed to practise their religion openly. It's thought that the song helped to teach young Catholics about their faith without anyone else knowing what the song was about, ie. the song has two meanings. Below is a 'translation':

Finally, it is worth noting that though we might find a twelve day-long celebration of Christmas a little extreme, there are many countries in the world where the feasting goes on even longer. In some Latin American countries the celebration is stretched out for no less than forty days, only ending in the festival of Candlemass (February 2nd).