Home > Around The World > Christmas Traditions in Mexico 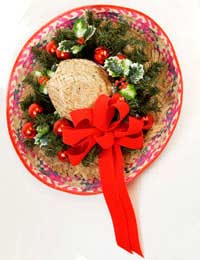 Funny how the last thing that crosses your mind when you're thinking of a warm and sunny country is the fact that the people there also celebrate Christmas… It makes sense, though: you don't need a cold December month and entire cities covered in a thick layer of snow to remember the birth of Jesus Christ.

And that's what Christmas is all about in the very Catholic country of Mexico: remembering that special day more than two thousand years ago when the son of God was born in a little stable in the town of Bethlehem. The celebrations start with "Las Posadas": nine days of processions enacting Joseph and Mary's search for a place to give birth to baby Jesus.

The special thing about this tradition is that the procession is entirely made up out of children, led by two of them dressed up as San José and Virgin Maria, and followed by little angels, the Three Wise Men ("Santos Reyes") and plenty of boy and girl shepherds ("pastoras y pastores"), clutching paper lanterns and staffs. They call at three houses: they get turned down at the first two, and then let in to the third, where a big party ensues, complete with piñata smashing and lots of sweets.

The Pastorela or Nativity Play

Another special Mexican Christmas tradition is the Pastorela: a play about the shepherds who are notified of the birth of Christ by an angel, and then follow the Bethlehem star to go and pay their respect to the Holy child. They have a hard time getting there but succeed in the end, and the plays are joyous - and very popular - affairs.

And the Mexicans don't even stop at that: every home features a nativity scene, called "El Nacimiento". They are elaborate affairs, made up of a small stable and clay figurines representing the holy family, the Three Wise Men, an angel, shepherds, an ox and an ass, and sometimes even symbolic representations of evil. This scene is built over the course of days, and is finished on Christmas Eve, when the newborn son of God is placed in his little crib.

Given the religious nature of the Christmas celebrations, it may come as no surprise that the Mexicans go to the midnight mass (here called "Misa de Gallo", or Rooster's Mass) before they start eating their festive dinner. And a highly original dinner it is, too: in Mexico there's no turkey being served on Christmas Eve. Instead people eat lovely local dishes like "bacalao a la vizcaina" (a cod preparation), "revoltijo de romeritos" (greens in a succulent mole sauce), tamales, and maybe even a suckling pig. They wash down their yummy grub with "sidra" (cider) and "ponche" (hot fruit punch).

The "Noche Buena" (or holy night) then continues after dinner with the opening of gifts and another round of piñata smashing. Mexicans also have a penchant for fireworks. Christmas day is a pretty quiet affair, and is spent with the family.