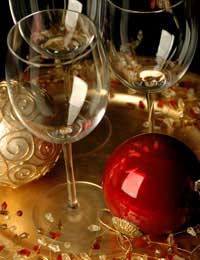 Why not entertain your family and friends with a test of their Christmas knowledge. Take a our light hearted quiz below. You'll find many of the answers here on this site.

Please find the answers below. If you're on a computer, we've helpfully added links to detailed information if you really want to 'impress' your guests!

1. Thomas Smith - he was a London confectioner from London, who decided to wrap other things than sweets in his famous twists of paper. He saw a half-burned log fall from the fireplace and spark back to life with a bang. He decided to add that “spark of life” to his “bonbonnes” and came up with his “Bangs of expectation” – our Christmas crackers.
2. Edward H. Johnson, who worked with Thomas Edison – the man who invented the electrical light bulb. Johnson presented his tree to journalists on the 22nd of December 1882 in his New York home: it had eighty light bulbs in red, white and blue colours.
3. Once in Royal David's city. The word carol stems from the French word "caroller", which refers to a circular sing and dance fest.
4. Dasher, Dancer, Prancer, Vixen, Comet, Cupid, Donner, Blitzen
5 (a) Clement Clarke Moore. (b) The original Christmas rhyme was written by Major Henry Livingston, Jr. (1748-1828) in 1807 and called - Account of a Visit from St. Nicholas. Moore was credited with the nursery rhyme after an acquaintance published it in a newspaper.
6.1954 - it starred Bing Crosby, Danny Kaye and Rosemary Clooney
7. She is his aunt
8. Irving Berlin
9. Turkey
10. 9 ladies dancing
11. The Ghost of Christmas past
12. Caspar, Balthazar and Melchior
13. Gold, Frankincense and Myrhh
14. Josef Mohr, an Austrian priest
15. Norway - donated each year by the people of Norway as thank you to Britain for its help in the second world war when Norway was under German occupation.
16. A male turkey is called a stag here in the UK. In the USA they are referred to as Toms and Gobblers, but no points for those answers!
17. Mistletoe - it's an evergreen shrub that grows in the branches of old trees, most popularly the apple tree. It can also be found on lime, ash, hawthorn and other trees with soft bark.
18.Egg Nog contains - eggs, sugar, vanilla extract, nutmeg, brandy, rum, milk, cream - a point for naming any four of these ingredients.
19. St Stephen - the opening line of the carol goes "Good King Wenceslas looked out on the feast of Stephen"
20. St Francis of Assisi is believed to have put on the first nativity play in Italy around 1223. Not many people could read and so plays were a means of telling stories

So how did you score on Christmas knowledge? Maybe you know more about world in general...so why not try our general knowledge quiz next?