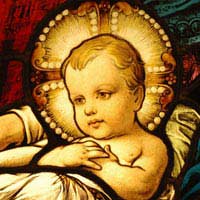 In the night of the 24th of December going on the 25th, a child was born in Bethlehem, the town of David. The baby boy was called Jesus, and his parents were Mary and Joseph, according to the Bible Mary was a virgin who became pregnant through the Immaculate Conception and so the son of God was born.

Joseph and Mary had to go through quite an ordeal, that night: they had come to Bethlehem from Nazareth in Galilee to register, when Mary went into labour and it became clear she was going to give birth any time soon. So they went from inn to inn but were turned away time after time, until finally they were allowed to use a small stable which already housed an ox and an ass.

It was in that cold stable heated only by the animals that Jesus was born, and where Mary wrapped the son of God in pieces of cloth and laid him in a manger. The new parents soon had the possibility to share their joy: an angel appeared to shepherds who were resting in a nearby field to tell them about the joyous occasion. At first the shepherds were stunned (you don't see angels everyday), but as soon as they got over their shock they set off to find Mary, Joseph and baby Jesus.

The story is of course well known: it is the first one of the New Testament, and the one that introduces the son of God to the world. Children learn it in Bible class, and during Advent it is told many a time. And it's not just the words that are familiar: Christians and non-Christians alike are well acquainted with the sight of the scene, as it is often depicted and even re-enacted.

It is a tradition in many Christian countries, for example, to place a small stable holding a representation of the nativity scene under the Christmas tree. These range from very basic (Mary, Joseph, Jesus, the ox and the ass in a little wooden house) to fabulously intricate carvings and sculptures also including the shepherds, the Three Wise Men, the Star of Bethlehem that lead the latter there and even depictions of evil in its many forms.

Bring it to Life

Another popular and hugely entertaining tradition is the live nativity scene: a full size stable is erected - most frequently close to the church - and populated by people dressed up as the holy characters. Spectators flock around the stable and often start singing Christmas carols and Catholic hymns.

Some schools and church groups put on nativity plays as well, in which children act out Mary, Joseph, the Angel Gabrielle and the North Star as well as the Shepard's and Wise men.

In Mexico, the annual Las Posadas processions, which go on for nine days, consist of kids dressed up as the Holy Parents and the shepherds going round from door to door to find "room at the inn".