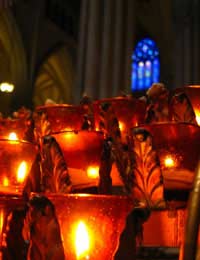 Bart Simpson once famously said that - Christmas is the only Christian holiday celebrated by people of all religions - and though very funny, the statement is obviously false – even though Muslims do recognize Jesus Christ as a prophet. The birth of the Son of God is celebrated all around the world, however.

The most well known religious ceremony of the year takes place on Christmas Eve, when people gather in church for the Midnight Mass. It is the culmination of Advent, and a time for celebration. Churches are especially decorated for the occasion: there are lots of candles everywhere, typical Christmas decorations like holly and wreaths, and quite often also a depiction of the Nativity scene (the birth of Christ in the stable in Bethlehem).

Liturgically speaking the Midnight Mass is the end of Advent, which means that the time of contemplation culminates in a joyous celebration of the coming of Christ. The reason why this is celebrated at midnight is because it is generally believed that Jesus was born exactly when the clock struck twelve, over 2000 years ago. Priests who like to follow the Midnight Mass traditions closely usually open the service with these words from the Second Psalm: “The Lord said to me: You are my Son, this day I have begotten you”.

A nice tradition during Midnight Mass is the sign of peace: people shake hands with their neighbours or - when they feel particularly joyful – hug them. Candles are also a common element in the celebration: church goers are given a candle before the start of Mass and at a certain point a flame is then passed on, until everyone is holding a lighted candle. Light is an important part of the Midnight Mass: it means truth, gives us life and shows us the way. The Book of Isaiah is often quoted: “Upon the people who walked in darkness a great light has shone”.

Another common element in the various Midnight Mass ceremonies is the singing of hymns. Christmas Eve is one of the most important nights for church choirs everywhere, and most of them spend months practising for this special occasion. “Silent Night, Holy Night” is the absolute classic among carols, and is sung in every service anywhere in the world. “O Come, All Ye Faithful” is another popular one, as are “Angels We Have Heard on High” and “What Child is This”.

People dress their best for the Midnight Mass: it is not uncommon that brand new suits and dresses are donned for the occasion. Kids generally love Midnight Mass: they get to stay up later than usual – and in quite a few cultures, presents are opened after the church ceremony. An extra reason to be attentive during Mass…

Finally, it is interesting to note that in the ecumenical spirit, non-Christians are also allowed to attend the Midnight Mass - in fact, they are frequently invited to do so. Joy, after all, is something for the whole world to share. So maybe Bart was right after all…