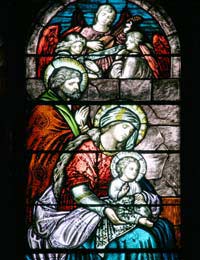 Christmas is not a good time to be a turkey: all over the world, these big and tasty birds are the prime choice for Christmas meals. And the same goes for Spain, although the Mediterranean version is slightly different - and tastier!

Everywhere in the beautiful country of Spain on Christmas Eve, mothers (and sometimes fathers as well) cook up the famous "Pavo Trufado de Navidad": a big juicy turkey prepared with truffles, a local and very rare product. The meal, which is traditionally enjoyed in the company of the extended family, is not the start of the celebrations though.

The Spanish really enjoy spending a lot of time together with as many members of their family as possible just as much as they like great food, and so Christmas starts with shopping for delicacies at the Christmas market. As soon as the sun sets hundreds of little oil lamps are lit, and people return to their homes to start preparing the feast. But before they eat, they celebrate in a different way first.

Somewhere around midnight, bells ring throughout the whole country. This is to announce the "Misa Del Gallo": the Spanish name for the midnight mass, literally meaning "Mass of the Rooster". There is a lot of singing during this service, and the whole ceremony is lit by the splendid light of candles.

On Christmas day, the Spanish enjoy another age-old tradition: they join in public places where the kids sit on swings while everybody joins in more Christmas carolling and general jolliness. The Spanish also jump over bonfires at Christmas: though this is obviously a pretty dangerous thing to do, they believe it will actually protect them and bring them good health. The Spanish name for the bonfires is "Hogueras", and the tradition is many many centuries old.

Of course, gift giving is important in Spain too - like just about everywhere in the world. But there are no socks hanging from Spanish fireplaces, nor are gifts traditionally placed underneath the Christmas tree - though trees are as common a phenomenon in the Mediterranean country as anywhere else where the holy holiday is celebrated. Instead, kids place their shoes by the fireplace, and fill them with straw. Their parents then fill those with little gifts. And this does not happen on Christmas Eve either, but on the 5th of January.

The reason for this is that the Spanish do not have the Santa Claus tradition. Instead, they have the tradition of the Three Wise Men as gift bringers - just like in the Bible. That is why the gifts come so "late", too: they stick close to the original biblical story. The advantage of that is obviously that the celebration lasts a whole lot longer…