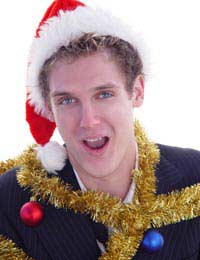 There's no place where people spend more time in their lives than at work: sure, sleeping takes up a huge chunk, we dedicate a few years to eating and another fairly enormous amount of waking hours to sitting on the toilet, but work decidedly takes the number one spot. So it had better be fun, right? Make your work work for you: what better way to bring everyone closer and to lift the spirits than to throw an office Christmas party? There are a few things to keep in mind though…

If you're anything like half the population, you probably enjoy a bit of egg nog or some mulled wine in your Christmas mug - brings out the good old holiday spirit. So set up some of the good stuff for your co-workers, but make sure not to make it too strong: you don't want to be falling over drunk in front of your boss or slurring in his wife's ear. Or worse…

Presents are an essential element of every Christmas party - whether it is with your family, friends or colleagues. Of course you don't need to spend as much on the latter category, and you certainly don't need to buy something for each of them either. That's why the Secret Santa formula's such a good idea: just draw one of your co-workers' names out of a hat or sock and get that person a cheap but fun prezzie. And hope you don't get a sweater in return!

People who party get hungry, so set up a table with snacks. Don't overdo it though (this is an office party after all), just lay on some stuff that everybody will like and that is likely to soak up some of the alcohol (cheese is always a safe bet). Reindeer satays are probably not such a good idea.

It's a safe bet to assume that most people who will be attending your office party will have had their fair share of "Christmas classics" by the time they walk in, so why not replace the standard Bing Crosby compilations with some modern renditions of those very same songs or - even better - a karaoke machine loaded with the Jingle Bells stuff? Makes for pretty hilarious entertainment, and works wonders for the team spirit as well - there's nothing like hearing your boss squeal his way through "Santa Baby".

Of course you want everybody to be able to celebrate Christmas with their loved ones as well, so don't take any risks: arrange for some transportation to get everybody in the office home safely. No need for limousines or even cabs: a designated driver with a people carrier will do just fine. It's the finishing touch to a party everybody will love you for all through the next year - or at least till the next morning.