How to Make Christmas Mince Pies 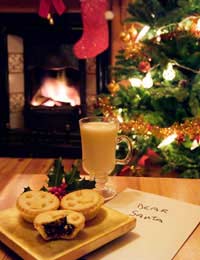 All the way from the fanciest tables in London down to the simplest of family dinner parties in small towns, no English Christmas is ever complete without a generous serving of mince pies. But what makes the small pastries so special, and why are they such an essential part of the holiday tradition?

Where Does the Mince Pie Tradition Come From?

Mince pies have been around since the middle ages: back then the “mincemeat” filling really did consist of chopped meat, mixed with dried fruit and other sweet ingredients. Gradually, the meat disappeared from the filling and only suet (animal fat) and the chopped fruit remained. Mince pie became customary Christmas food somewhere in the sixteenth century.

Mince pies come with their own legends and myths: one of them states that when cooking the filling, the mix of fruit, suet and spices can only be stirred clockwise – stirring it the other way around is said to bring bad luck to the cook for the next year. If you do it right, you are allowed to make a wish. This superstition has somewhat been forgotten, but most people do observe the rule that at least one mince pie a day should be eaten during the twelve days before Christmas, and that you can make a wish while eating your first one. In the old days mince pies were also supposed to be eaten in complete silence, but that tradition has vanished too – not much chance for peace and quiet at office parties…

Contrary to mulled wine and Christmas cake, most people use pretty much the same recipe for their mince pies. Here it is:

You can make some tasty variations on the traditional mince pie. Check out our ideas below:

Buy some ready to roll filo pastry, roll out and cut into squares (approx 10cm or 4' sides). Place a blob of mincemeat the size of a ping pong ball in the middle of each square. Brush melted butter around the edges of the square and fold across to make a triangular shaped parcel (a bit like a samosa). Cook following the instructions given for the filo pastry or until golden. Dust with icing sugar when cool.

Make the pies as in the traditional recipe above, but without the tops. While they are cooking make some of our quick microwave meringue balls as follows:

Whisk the egg white lightly. Sift the icing sugar into the egg white and whisk until you have a smooth paste. Roll the meringue into small balls and place a few on a microwaveable plate covered with kitchen roll. Microwave on high power for about 1 minute and 20 – 30 seconds. The balls will expand to create crispy meringues. When your mince pies have cooled, place a meringue ball in each one. Sprinkle with cocoa powder or finely grated chocolate as an option.

Bake mince tarts as normal but again without a pastry top. Roll out some marzipan (or almond paste) and cut into star shapes. Once the tarts have cooled, place a marzipan star on each one. If you have the time (and the inclination), make some holly leaves with the remaining marzipan and some green food colouring and place a sprig in the middle of each star.

Take a look at some more chistmas baking ideas.